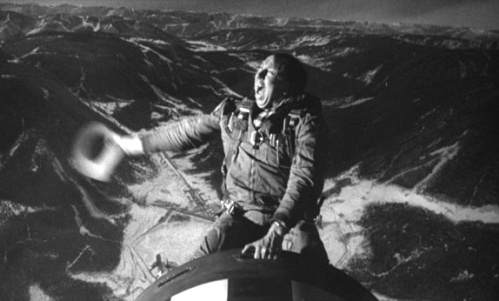 Slim Pickens as a crazed Air Force pilot riding a nuclear bomb down to certain oblivion in “Dr. Strangelove.”

Back in the late 1950s, my favorite singing group, The Kingston Trio, performed a song called “The Merry Minuet” by Sheldon Harnick. It mocked the current tragedies of the time and the possibility of our world ending in nuclear war. I suppose it was a form of whistling past the graveyard—of taking some of the edge off of the unthinkable possibilities. At 14, I thought the song was terribly funny and witty.
I still listen to my old Kingston Trio favorites, but I notice that this particular song isn’t included in their collections. And I can’t laugh about that song anymore. The reason isn’t that the world seems more grim now than it did back then, but that I am disappointed because the world doesn’t seem to have changed much. Almost 60 years have passed, and what progress have we made toward world peace or harmony?
The song spoke of natural calamities, of strife in Africa and Iraq, of political unrest and possible upheaval in Europe. Then—well, listen to some of the words that followed:
“But we can be tranquil and thankful and proud
For man’s been endowed with the mushroom-shaped cloud
And we know for certain that some lovely day
Someone will set the spark off
And we will all be blown away . . . .”
Members of my generation were confronted in our teens with the possibility that nuclear war could end the world as we knew it. Want to see how that messed with our minds? Go online and look for a movie called “On the Beach,” a grim 1959 drama about the last survivors of a global nuclear war waiting in Australia to die as radiation poisoning in the atmosphere finally teaches them. Or check out the Peter Sellers black comedy classic “Dr. Strangelove: or How I Learned to Stop Worrying and Love the Bomb.” At the end of that one, audiences didn’t know whether to laugh or go home and hide.
In the decades that passed, the world was shaped politically by the concepts of Mutually Assured Destruction and détente to make nuclear war an almost unthinkable option for any nation. Perhaps we all came to breathe a little easier. The duck-and-cover drills of our youth and the idea of building a backyard bomb shelter faded away. (See the more recent movie “Blast from the Past.”) We all thought the Cold War was gone for good.
But now there are militant terrorist groups—not nations, but fanatical ideologues–unimpressed by the concept of détente and undeterred by the fear of Mutually Assured Destruction. Some of them would not care how many people might have to die in a nuclear exchange so long as they were the last people left standing. Some of them would dearly love to get their hands on nuclear weapons.
Listen to the ending of “The Merry Minuet”:
“What nature doesn’t do to us
Will be done by our fellow man.”
With random, unpredictable terrorist attacks, there seems to be almost no place on earth where we can be safe from the harm done by our fellow man or woman, if that person is determined to kill or wreak havoc. And a resurgent Russia, with egotistical, ambitious Vladimir Putin leading the way, seems bent on confronting the West militarily. So where is safety?
Of course, there are steps we can take—learn how to avoid places where terror attacks might happen, build that backyard bunker, maybe carry a weapon. But nothing can offer complete security. There is always the crazy who suddenly snaps when you’re on hand, or the stray meteorite.
I don’t mean to make light of the possibilities. Of course we should be as prepared as possible to protect ourselves. But life has always been unpredictable, and may be uncertain at times despite our best efforts. I believe that the best protection is to live a good life. Sure, protect yourself as best you can. But live so that you can confidently ask for God’s protection. He truly does give it when we still have work to do for Him on this earth. And when He chooses to take us, we will be prepared to meet Him—even if death comes at the hands of someone bent on murder and destruction.
The only real protection the world has against people like those is for all of us to live God’s laws. There will always be weapons of destruction available to people who want to use them. Preventing sick and hate-filled people from having these weapons is an excellent idea, of course, but ultimate protection lies in creating a world where there is no one who has the desire to use them.