Like much of his other farm equipment, this circa 1950s GMC cattle truck had probably been well used when my father-in-law bought it.

The headlights are broken out, and there’s a hole in the windshield—the work of some neighborhood marksman’s bullet or large projectile. There is more rust on the body than original green paint. The tires are flat and their rubber is cracked. The wooden framework on the back of the truck is weathering badly.

The old cattle truck in the pasture behind the house hasn’t been licensed since the mid-1970s. It hasn’t been used since my father-in-law stopped raising and selling cattle.  Probably we ought to have it towed away.

But we don’t, because it is more than just a decaying wreck.

It is a symbol of some things that have been important in our lives—some things we don’t want to lose. And it brings back some important memories.

My father-in-law’s old work gloves still lie on the seat where he left them. He was a working man, a model of independence and industry. He ran a farm with hard work and no 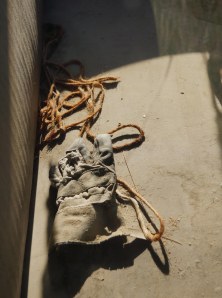 government subsidies or other help. He was frugal. When he stopped farming in the late 1970s, he still had the Allis-Chalmers tractor he had bought new in 1941. When we explored the old barn after he died, we found buckets and cans of old bent nails and salvaged bolts that he undoubtedly intended to reuse sometime. He never had a lot of money—but he was rich in integrity, honor, and compassion for others. For the most part, the good deeds he did were never publicly known, but we have lost track of the number of people who have told us since he died of some good deed he did quietly for them when they were in need.

John and Ruth were like that. They were independent but compassionate people who did a lot of good without broadcasting it, and they taught their children by example. Before the family sat down to Sunday dinner, Ruth would often send one of the children with a plate of food for Brother So-and-So or Sister So-and-So who were shut-ins or sickly. Just a couple of years ago we had to get rid of the old wood stove in the kitchen where she used to cook, and bake bread several times a week; we couldn’t get replacements for some of the stove’s cracked or broken iron plates. The old Maytag wringer washer she used before John bought her a newer, automatic washer and dryer, sits in a corner in the basement, under the indoor clothesline she used in the winter. That washer still works.

Norman Rockwell would have found good models in John and Ruth and their family life. They taught their children well. When I was ready to be married, I wanted to find a woman reared with those kinds of values. (When I found her, it was also nice that she was very pretty. She is still a beautiful woman after more than 45 years.) Sometimes it is hard for her to let me do something special for her. She sees no point in spending money on something you can do for yourself, nor in buying things that cost more simply because of the name on them. She knows how to pick out a great outfit at a thrift store. 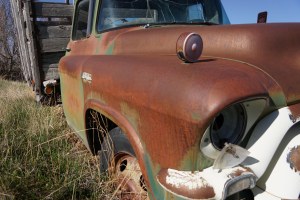 The old cattle truck is not much of a monument for a man of John’s character and moral stature. But it reminds us of some important things about him. It rolled with him once, sliding off a muddy, rain-slick dirt road. He pulled it out of the creek and kept on driving it; the truck kept on going—just like he did. My wife remembers riding in the back of that truck from her small farm town in Idaho down to Utah to bring home fresh fruit for canning. She remembers overnight camping trips by the spring up in the canyon with the whole family riding in that truck on the occasions when her farmer-father could take a brief outing.

So the truck is a symbol of some important things. But it can’t last forever. What will last are the examples and the memories that John left with his children and grandchildren.

I would be honored if someday people could remember me as they do him.