Who are the Gadianton Robbers?

Some of you who are not members of The Church of Jesus Christ of Latter-day Saints might tune out when I say the robbers’ story is told in the Book of Mormon. But wait—don’t go yet. The story holds a lot of important lessons for our time and our society.

The Gadianton Robbers were bands of criminals who lived among some of the civilizations of ancient America. The robbers sometimes hid in plain sight among the people and covered the crimes they committed with the help of other members of their band. Sometimes the robbers grew strong enough to control their own territories—defying the government, so strong that the army could not go in and defeat them. Sometimes they grew powerful because they infested the government, turning a blind eye to crime and allowing the wealthy to buy justice while the poor suffered injustice at their hands.

The robbers grew powerful with the help of ordinary people who joined in or supported criminal activity because they too could profit from it. Sometimes the criminals fed the desires of those people for wealth and power, or fed their addictions. The robbers decimated societies, bringing down governments. Once they issued an edict to the people of their time: Join us and take part in our activities, and we will support you in them—or defy us and die.

Does any of this sound familiar?

In Mexico and Central America, drug gangs and cartels are so powerful that they are a fact of life for many people. Governments turn something of a blind eye to them because 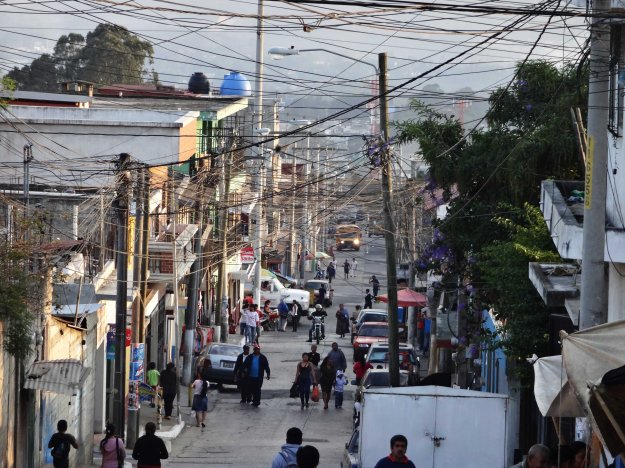 Violence born in poor barrios of Latin America can easily enter affluent communities in other areas by invitation–when people in those areas buy into the drugs gangs sell, or into their other activities that promise big profits.

defying them can mean death. While my wife and I were living in Central America a few years ago, a well-known judge who opposed gang power was assassinated one evening on her way home from work; a motorcycle pulled up next to her car at a stoplight and she was shot several times. In Guatemala, a young teen we knew spent months recuperating from gunshot wounds he received while shielding a little girl from a drive-by shooting; gang members shot up a neighborhood store, apparently because the owner was not cooperating. Criminals were rarely caught, and if they were known, rarely prosecuted.

One young friend of ours told us that he and his wife were desperately trying to find a private school where they could enroll their three-year-old twin daughters a few years down the road. It would be punishingly expensive. But in the public schools, he said, gangs started recruiting children as early as the second or third grade. Children who refused to join could be beaten or killed, or their families might be targeted.

Gadianton robbers have no particular ethnic or national background. They might be Russian, Asian, or white supremacists. This kind of evil is found in some degree in most countries of the world. It seems to be growing in strength, but particularly in the United States. Is there a solution?

In that Book of Mormon story about the Gadianton Robbers, the people who supported justice and goodness eliminated the robbers among them at one point by preaching the gospel of Jesus Christ to them—and converting all of them! People who had never known a better way readily accepted gospel truths when they were taught, and became contributing, productive members of society. Gospel teachings about love and doing good to others turned out to be the most potent weapon the people had against the evil in their society. Generously, this group of early American Christians always welcomed enemies who wanted to change their lives and live the gospel.

Later, faced with that join-or-die ultimatum from robbers hardened in evil, the people refused. Instead, they banded together in one place, pooled their supplies, and waited the robbers out. When the robbers could no longer live by plundering and could not afford to settle in and plant crops for food, they eventually became weak and desperate and the people were able to wipe them out in battle.

So how does the story of the robbers apply to us today?

The way to fight gangs and drug cartels is for all those ordinary people who are supporting them indirectly to stop. Stop buying their drugs. Stop buying their services. Stop profiting from their activities. Deprive them of the money that gives them power. Refuse to take part.

Once gangs have their tentacles wrapped around someone, they fight against letting go. They have a habit of punishing people who want to walk away from their lifestyle. The criminals will fight back—unless they are deprived of their support and become too weak to resist. They are so entrenched in modern society that it will be hard to freeze them out.

But has anything else worked?

It seems we have two choices. Preferably, we can reach out to those involved in gang activities and try to help them change into people dedicated to building up rather than destroying our society—change into the people our Heavenly Father has given them the opportunity to become.

If that does not work, then those who are not ensnared in the gangs can say a firm “No” to the drugs and money and corruption they offer—avoid being part of the problem—and wait while the gangs wither away for lack of support.

This approach will surely work—if there are enough people left in our society who are not caught up in the corruption one way or another.