There is a fine museum honoring British statesman Winston Churchill in a place that most Americans would not expect—in heartland America, at Westminster College in Fulton, Missouri. This is the place where Churchill, invited to America by President Harry Truman, gave his famous “Iron Curtain” speech in 1946.

The speech may have seemed controversial at the time, but Churchill’s views turned out to be prescient. World developments he envisioned came true. 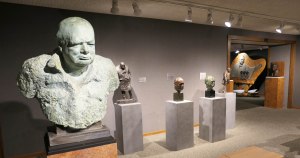 The museum includes a gallery of sculptures of the world leader and accomplished artist.

What interested me most at the museum, however, was the material attesting to the character of the man. Admittedly, I am an admirer. I believe Winston Churchill was one of those historical figures raised up by God to shape his times. But I think anyone would have to acknowledge that Churchill was a man who achieved, and inspired, great things.

In one of the galleries of the museum there stands a photograph of Churchill, the prime minister, with this quotation above it: “Criticism is easy. Achievement is difficult.”

This is the kind of statement that almost demands self-examination by the reader. When I see a problem, do I simply criticize? Or do I try to suggest and support a solution?

Experience has taught me this truth: When you know there is a problem, it does little good simply to comment on it or to criticize someone or something that might be at fault. One who points out a problem ought to feel an obligation to help solve it. Those who look for solutions, as Churchill undoubtedly knew, are those who achieve.

Those who do not look for solutions are often part of the problem.

Long ago I heard these words from a man I regard as a prophet of God, Gordon B. Hinckley: “Cynics do not contribute. Skeptics do not create. Doubters do not achieve” (“Let Not Your Heart Be Troubled,” Oct. 29, 1974, in BYU Speeches at BYU.edu.) Elder Hinckley, then a member of the Quorum of the Twelve Apostles of The Church of Jesus Christ of Latter-day Saints, was quoting a lesson from his father. Whether you believe in prophets or not, it is hard to ignore the wisdom and truth of that comment.

As a politician and an experienced leader, Churchill knew a thing or two about being criticized. But he was not deterred from moving forward and achieving things he envisioned. The lesson from leaders like Churchill, and Gordon B. Hinckley, is not to let critics discourage us when we are working toward a worthy, righteous goal.

Another lesson is not to be a critic. Often, criticism is a form or bullying. It does little to shape other people’s lives for good. (And why should any of us feel we have the right or duty to shape someone else’s life the way we think it should be? Most of us have trouble enough managing our own lives properly.) Ultimately, criticism damages humanity as a whole. It would be far better and more useful to spend our time building others up.

When the disciples saw Jesus walking toward them at night over the troubled Sea of Galilee, Peter called out, “Lord, if it be thou, bid me come unto thee on the water.” The Lord answered simply, “Come.” And Peter became only the second person known to have walked on water.

Let us never be the wind of doubt for anyone.

Let us be the ones to invite others to go forward. Of course, we do not have the divine stature of Jesus, and others are unlikely to walk on water. But with our help and encouragement, they may walk where they never had believed they could go.