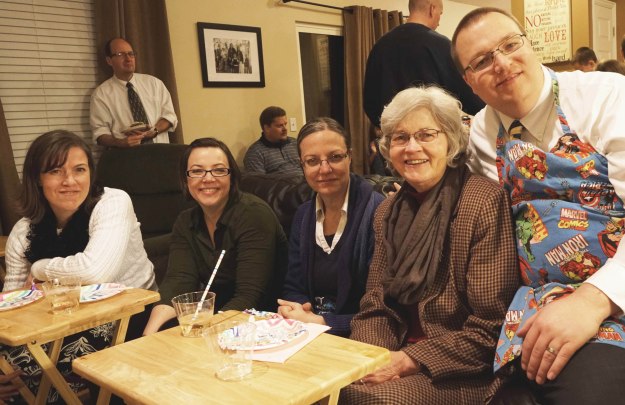 The mother of our children, with four of her five.

Mother—a word for female parent, something we all have.

But in our hearts and minds, the word is defined by “my mother”—the one we each know.

My mother was a strong, resilient woman dealt a bad hand by fate, if you will—widowed at 24. She had to do the parenting work of two, and I wasn’t especially easy. I’m sure God made her equal to the task. She had to take it on in an era when biological motherhood didn’t necessarily convey any legal rights; those she had to establish in court. I learned much from her strength as she made her way through what was essentially a man’s world.

My mother got much of her strength from her own mother, a woman with the courage and firmness to uphold what was right in this life, no matter what, or who, the opposition. She was not one to back down on matters of principle, and when she drew herself up to her full four-foot-ten and articulated what she knew to be true, people listened. By force of will she lived a normal life for more than 40 years while struggling with challenges of health that some could have found disabling.

From my father’s mother, I learned about the power of love. She had more than enough for seven children—six sons, and much later a daughter, born when Grandma was nearing fifty. To the end of her life, she would worry about whether she might have done more for two children who chose paths not congenial with their upbringing. In her late eighties, dealing with heart problems, she was always looking for ways she could do more for the “girls” in the neighborhood—meaning the other widows who were only in their sixties or seventies. She was the white-haired grandma from a Norman Rockwell painting, with warm bread just out of the oven and her own special recipe cookies in the old Rex lard can that served as a cookie bucket. All the grandchildren knew exactly where to find it when they came. It was the inheritance I chose first from her house after she died.

The wonderful, beautiful woman that I married came of industrious, faithful pioneer stock like my grandmother’s family. My wife did not have living grandmothers, so she adopted mine. For the first fifteen years of our marriage, we spent a lot of time helping Grandma Searle, and my wife grew to admire her.

With time, my wife has grown to be like her. Now my wife is the white-haired grandma with cookies or other treats when the grandkids come, a grandma who can be counted on for comfort when a day has gone badly, and the woman who focuses on how she can help others around her.

I have no doubt that Heavenly Father very carefully chose His daughter Eve, a strong, loving, and wise woman, to be the mother of us all. She is unfairly characterized as weak for a transgression in the Garden of Eden. It took a powerful and exemplary woman to live with the consequences of her decision. I think Heavenly Father chose her for the role because she had so many of the essential qualities that He wanted His children to inherit. She was the perfect complement to all the strengths He saw in His son Adam.

I see in my wife many of the fine qualities that I’m sure were present in Mother Eve. My wife has been the best companion and mother to our children that I could ever have chosen.

She will deny it, of course, and protest that she is not perfect. Maybe not, but in my heart I know that she is a lot closer than I. The children that Heavenly Father sent to our home could not have had a better mother. I often hope that they are wise enough to realize this. When they were younger and they asked what she wanted for a birthday, Christmas, or Mother’s Day, she answered, “Good children.” Now she has them—children to be proud of.

Every man should be able to feel that his wife is the best mother in the world. If he does not, Mother’s Day would be a good day to reevaluate his relationship with her and weigh all that she has done for him and their children. No mortal mother is perfect, of course—just as no mortal father is perfect. But this life is all about becoming—becoming what Heavenly Father knew we could be when He sent us here. The man who can see divinity in the mother of his children is getting a glimpse of her eternal destiny.