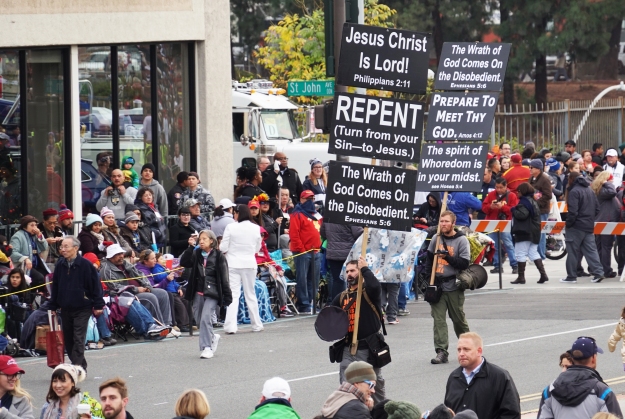 This wasn’t what people came to see—a man with a banner and a bullhorn calling on them to repent or face the wrath of God.

They came to see the annual Rose Parade, an event whose organizers like to call it 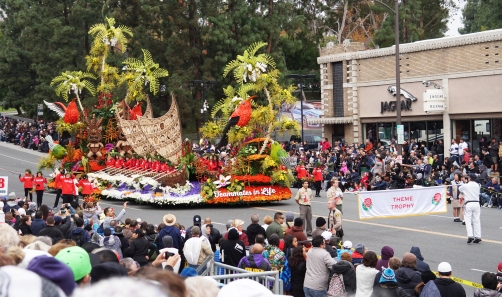 America’s New Year celebration. They came to see pageantry and pomp and beauty. What they saw instead, before the parade, was people telling them they are wicked and sinful and they’re on their way to being damned.

Spectators along our part of the parade route didn’t take this news well. The people with the banners and bullhorns were booed, there were snickers and jibes about their message, and there were cheers and clapping when the police motorcycle squad came along to clear them off the parade route.

It was hardly news that many of us are sinners—or at least it wasn’t to me. I know that I often do things Jesus Christ would not have approved. I am a man full of mortal weakness, and I certainly have need to repent. But most of us don’t enjoy being called out publicly for our hypocrisy or vanity or weakness.

I know that Jesus Christ will come again to the earth and we will all be responsible for the way we have lived our lives here. But the preaching we heard on Colorado Boulevard in Pasadena that day didn’t seem like the best way to spread the good news of His gospel. There was a lot about wrath and very little about the hope He extends to us if we repent. I believe hope is more effective in changing lives than chastisement. We all know our own sins. What we need to understand is how things can change for us when we give them up.

Still, I have to admire the courage of the people who were out there preaching. They must have known they would be received with ridicule and antagonism. It was the same reception given to prophets in Old Testament times, in Christ’s day, in Book of Mormon societies, and even in the present day. Those street preachers in Pasadena knew that what they did before the Rose Parade would be uncomfortable, unwelcome to many, possibly even hazardous. It took faith and deep commitment to their beliefs.

Something tells me that all of us who believe are going to need this kind of courage and commitment in coming days. Many of believe that a child knowingly invited by two people to grow in the womb has a right to experience life on this earth. Many of us believe that our gender is an assignment given before we came to earth and that rejecting it is rejecting a path God wants us to follow. Many of us believe that marriage was instituted by God to create a partnership in which one of His daughters and one of His sons grow together through mortal life, and beyond. We who believe these things are accused of ignorance, of bigotry, of narrow-mindedness by those who wish to force us to accept their way of thinking.

It is as though we were heretically teaching that the earth is round, when everyone agrees it must be flat, or that the emperor, naked as the day he was born, is wearing a beautiful new suit of clothes. Our very right to believe anything other than the groupthink favored by the most vocal and strident among us is being challenged. There are indications that anyone in our society who cannot accept a new “reality” that ignores moral anchors can expect to be punished. We may be shunned or charged, illogically, with hate and prejudice. There will be no escaping the intellectual tyranny.

If we insist on maintaining our right to believe according to our faith, and not according to the dictates of an unmoored society, we may need the depth of commitment of those street preachers at the Rose Parade. 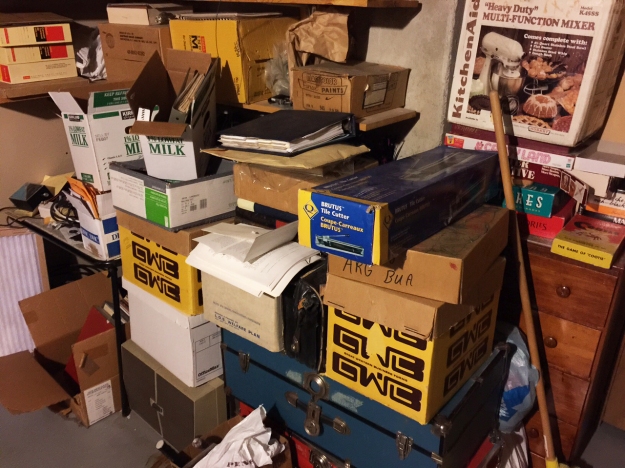 Do you have a room like this in your house?

Want to try an exercise in self-discipline? Try dejunking and cleaning out a six-bedroom four-bath house after 31 years, and after 47 years of accumulation.

I’m a packrat—the kind who has trouble throwing away something that by any stretch of the imagination might be useful again someday. Anyone out there want a Kodak carousel slide projector or a Super 8 home movie projector still in good working order? How about the collector’s edition of Star Wars episodes IV, V, and VI on VHS tapes? Or cassette tapes of Andy Williams Christmas music? 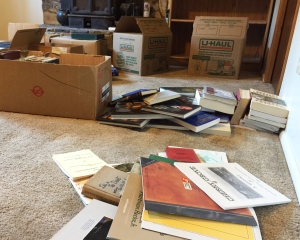 How can I give away books? I was always taught that books are treasures.

We’re downsizing, and we can’t keep everything. That includes some of the byproducts of more than 40 years in a satisfying career—notes and clippings, reprints of articles, duplicate copies of magazines, etc. It is hard, sometimes painful; it is like throwing away pieces of my life. But a lot of this stuff just has to go.

There is the problem: “stuff”—things we think we still need for some reason. Some of it seems too dear to part with, and yet we lived perfectly well without any of it while were away for 18 months serving as missionaries in Central America. Why, then, is it so hard to let go of it now?

Perhaps our minds and hearts—the spirits within our bodies—are like this at times.

In Mere Christianity, the great Christian philosopher C. S, Lewis wrote of how God can change us if we are willing. We might believe that if we could change a few things, maybe strengthen our faith a little more, we could become presentable little cottages. But God is interested in making something much more of us—a magnificent palace—if we will let Him. This will require more than minor repairs. It will require major changes, and it will require getting rid of some things we may hold too dear.

I suspect if we would examine ourselves carefully, most of us would be ashamed of the reasons we are holding onto some things—some of those old habits, some ties to past sins, some secret ungodlike longings tucked away in boxes of memories in the dark corners of our hearts.

So the critical question for each of us becomes: What do I need to throw away? And if I knew I would have the opportunity to show it to God who is the Father of us all, what would I keep?